HomeBlogEconomicsEXPLAINER: Why Nigeria’s inflation fell in December after 10-month surge

EXPLAINER: Why Nigeria’s inflation fell in December after 10-month surge 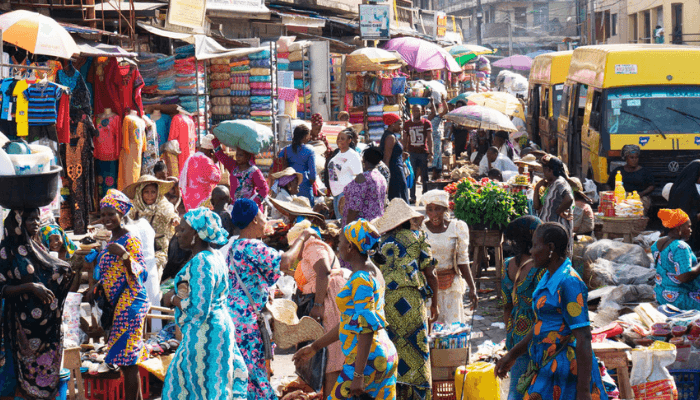 Nigeria’s headline inflation rate slowed for the first time in 11 months in December 2022.

According to data released by the National Bureau of Statistics (NBS) on Monday, the inflation rate eased to 21.34 percent from 21.47 percent in the previous month.

However, on a month-on-month basis, it rose by 1.71 percent, which was 0.32 percent higher than the 1.39 percent recorded in November.

“Basically, the likely factors responsible for the increase in inflation rate can be attributed to the sharp increase in demand usually experienced during the festive season, increase in the cost of production e.g. increase in energy cost, transportation cost, exchange rate depreciation, etc.,” the NBS said.

Analysts at Financial Derivatives Company Limited (FDC), led by economist Bismarck Rewane, had predicted in their latest Economic Bulletin report that the inflation rate would ease to 21.28 percent in December.

“Typically, inflation edges up in December highlighting the impact of festive demand on prices. However, our estimates show that disinflation is most likely in December’22 due to consumer price resistance, strengthening of the naira, and seasonalities,” it said.

It said across markets, sellers were compelled to bring down the prices of their wares amid the low patronage of consumers. “The prices of most food items declined or remained flat and in the same vein, the prices of non-food items remained relatively stable.”

“The exchange rate pass-through effect on inflation was muted in December. This has been the major driver of inflation in the last 10 months, and its stability is having a ripple effect on the imported products and muting the imported inflation,” the FDC said.

“A close analysis of the headline inflation components suggests that the moderation was mainly driven by a high base-year impact on the food inflation sub-component,” said Abiodun Keripe, managing director of Afrinvest Consulting Limited.

“On the positive, we observed a waning pressure on the exchange rate in the parallel market in December, a major development that could also aid mild disinflation in the near term,” he said.

Keripe added that the average exchange rate in this market segment fell from around N807.3/$1 in November to N745.7/$1.00 in December, the first moderation since November 2021.

“We suspect that the improvement might have come on the back of reduced speculation activities due to the ongoing mop-up of old higher denominations ahead of the validity deadline of January 31, 2023,” he said.

Damilola Adewale, a Lagos-based economic analyst, said the moderation in prices is just a normal statistical base effect, not real significant improvement.

“The moderation we had year on year is basically because of the base effect arising from the 2021 price level. It is not as if there was tremendous improvement in the drivers of inflation,” he said.

Before the general price growth eased last month, prices in Africa’s most populous nation had increased steadily for 10 months due to the Russia-Ukraine war.

This has made many Nigerians to be poorer than they were in 2021, with 63 percent of the population (133 million) suffering from multidimensional poverty, according to the NBS.

The country’s inflation growth has eroded the N30,000 minimum wages by 35 percent, widening the poverty net with an estimated five million people in 2022, according to the World Bank.

Analysts are predicting that the moderation in prices will continue in 2023.

“Looking ahead, the headline rate is only likely to soften gradually. While we expect food inflation to fall back, elevated price pressures in non-food categories will prevent a sharp drop in the headline rate,” analysts at Capital Economics, a London-based economic research company, said.

Keripe said Afrinvest Consulting anticipates the headline inflation rate could moderate through the first quarter of 2023 to 19.3 percent, due in part to the high base year effect, low liquidity level, and recovery in the parallel market rate.

In November, the Central Bank of Nigeria’s Monetary Policy Committee (MPC) further raised its benchmark interest rate by 100 basis points to 16.5 percent as a result of the surge in inflation.

But there are expectations that policymakers are likely to latch onto the fall in inflation and keep interest rates on hold at 16.50 percent next week, rather than deliver a final hike previously expected.

“The latest inflation print provides ammunition for policymakers angling to end the monetary tightening cycle. We no longer expect a 50bp hike in the benchmark rate at the upcoming MPC meeting; instead interest rates are likely to remain unchanged at 16.50 percent,” analysts at Capital Economics said.

Some analysts believe that the slowdown in inflation rate might be short-lived due to the planned removal of petrol subsidy.

“Inflation is likely to trend lower in 2023; however, that could be short-lived if the planned removal of fuel subsidy by June-2023 takes effect,” Ayorinde Akinloye, an investor relations analyst at Seplat Energy Plc, said.

She said provision for the removal of the subsidy had already been made in the 2023-2025 Medium-Term Plan.